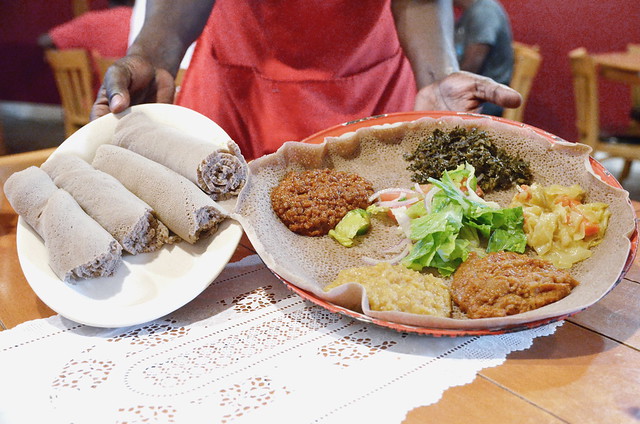 One of the biggest fights of my life occurred after someone asked “What is your favorite cuisine?”

After a pondering pause—with pizzas, banh mis, and pad see-ew fly through the flavor pockets of my mind—I said:

Immigrating from Kenya, June Owino came to San Diego a hopeful accountant who liked to cook. Happenstance brought Owino in front of the stove then out into the streets of the Farmer’s Market as Flavor’s of East Africa. The city embrace his stewed veggies and wafting spices—his booth remains one of the most popular of the San Diego Farmer’s Market scene—and so in 2011 a permanent store front opened in University Heights.

If you’re making your first visit to Flavor’s of East Africa, a sambusa is a must—these are the staple of Owino’s repertoire. The triangle folded pastries, stuffed lentils, potatoes or spinach, make a great handheld treat at the farmer’s market—but when I hit the restaurant I like to order food I can dig into with a knife and fork. 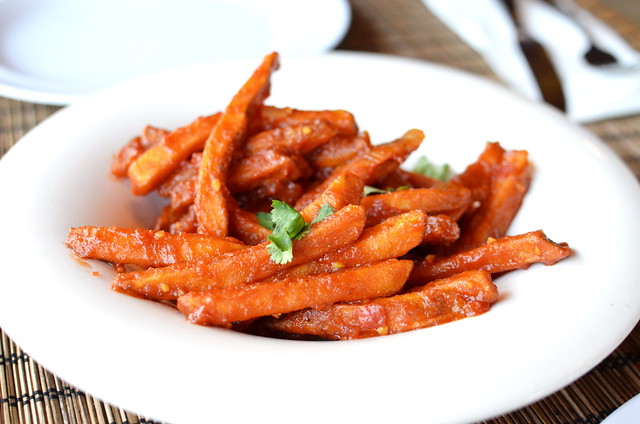 END_OF_DOCUMENT_TOKEN_TO_BE_REPLACED

Since eating at Meals by Genet my answer has unilaterally changed to: “Only if we go to Genet’s…”

Chef Genet Agonafer has ruined all other Ethiopian restaurants for me. Her food is heaven; all other Ethiopian food is earth. I avoided her for years, thinking the white table cloths, professional wait staff and candle lit dining room signaled a watered down “for white people” rendition of Ethiopian cuisine.  A tragic mistake.  Portions here seem small compared to the other 20 or so Ethiopian places on this block, but this is truly a case of quality verses quantity. As Genet explains, she’s the only restaurant on Fairfax that doesn’t cook their lentils in water. Instead she cooks her lentils down into a sultry stew in clarified butter. Seriously, I cannot even write this without salivating.

END_OF_DOCUMENT_TOKEN_TO_BE_REPLACED

I’ve said it before and I’ll say it again: Ethiopian food is my all time favorite food ever; if I had to eat one cuisine for the rest of my life this is it! In college, I literally ate at Berkeley’s Ethiopian Restaurant twice a week. So when I moved back to West Los Angeles, the berbere glazed arms of Little Ethiopian comforted my little broken heart.

Awash is located just off the main Fairfax strip—on Pico where parking is infinitely easier. From your prime parking spot, meander behind the black metal security gates into the florescent lit dining room. Ignore the ‘lived in’ quality of the space, although it will send germaphobes running. Personally I could care less: the tables are clean, the bread is warm and the rickety wooden bar is packed with beer drinking Ethiopian men.

END_OF_DOCUMENT_TOKEN_TO_BE_REPLACED

For years, YEARS, I read gushing accolades for Abistro in total disbelief since the Senegalese-meets-French menu is such a dull read. Nor did I believe the internet buzz, composed mostly of unsubstantiated statements like “The food was SO delicious,” or “It’s the best! Just go!”… like, what does that mean (and let’s pretend I *never* say such things). So I put off a visit for years. But with my move out of the neighborhood looming, I mustered up the will to make the walk into Fort Greene… and thank heaven I did… for the good, the bad…and the BYOB!

We began with the special appetizer of Sweet Plantains (which appears to be a standard special). The generous portion of ooey gooey fried plantains–smothered in maple syrup with a light sprinkle of scallions–is served with a side of pungent chipotle sauce. My Beau snickered as I gushed with delight over the creamy smoky sauce. “You know that is aioli… aka mayonnaise.” I didn’t–and I’ll admit, I cringed–but driven by flavor hypnotism, I summoned all my foodie courage and devoured the entire cup of my emulsified nemesis. If only all mayonnaises were as flavorful as this one… END_OF_DOCUMENT_TOKEN_TO_BE_REPLACED