The cavern of Gougere… or an empty brain…

When I began writing pizza reviews (two years ago this month!), I had no idea how complex the world of bread with stuff on top was. Easily distilled down for airport food courts, pizza is seen as a simple food. But it’s this  simplicity that makes ever element vital to a good pie. The most important of which is the crust. A perfect crust begins with baking, a circuitous world of science, art and deliciousness.

This is a world I know little about.

But pizzerias do! Any pizzaiolo worth speaking to will name Tartine Bakery as a source of inspiration (or at lest admiration). Case in point: The Gougere. A light choux pastry–made savory with Gruyère, black pepper and thyme–with a massive hole structure that recalls a cross section of pizza. Just imagine hitting that at the end of a slice of pizza (um, why hasn’t anyone done this yet?!).

The Chocolate Croissant, soft and buttery–more moist than flaky–hides two thick veins of chocolate. It deserves a trip through a toaster oven, but is still delectable at room temperature.

Though my heart belong to the Morning Bun at Olive’s in NYC; the sugar crusted, orange zest infused doughy roll from Tartine ranks pretty high in my esteem… especially when enjoyed in nearby Dolores Park.

The Croque Monsieur is where I get nerdy. Playing with the same components of pizza, the savory toppings sit on tart wheat fleck toast. The crust is baked to near-black and the is body sliced into finger thick planks. The bread balances hole density and gluten perfectly–no huge bubbles, no doughy spots will be found in a Tartine slice. The open face sandwich is covered with béchamel, Gruyere, shitaki mushrooms, asparagus, thyme and black pepper and served with a lone pickled carrot. Knife and fork are required tools. A butter knife is not sufficient… trust me. 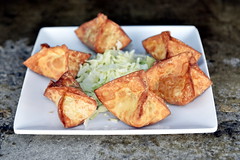 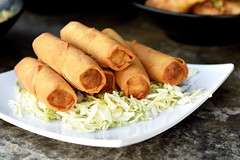 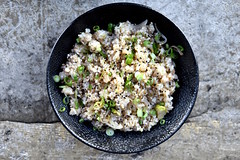 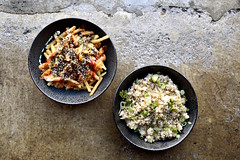 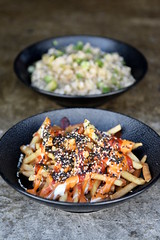 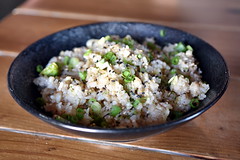