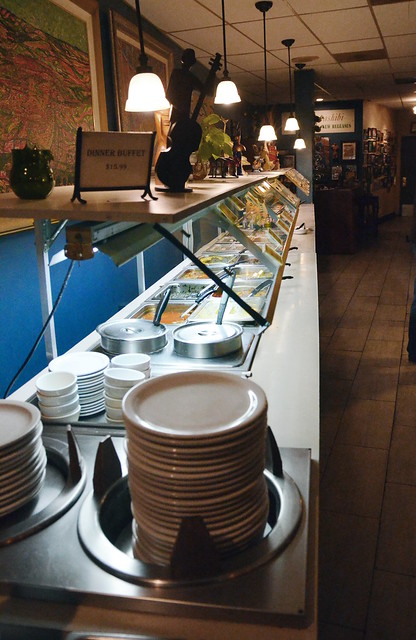 Art filled walls surround diners in San Diego’s Fairouz Cafe & Gallery, by owner Ibrahim Al Nashashibi, and numerous vegan options fill the hot and cold trays of the all day Greek and Lebanese buffet (Lunch $12.99 / Dinner $15.99).  All clearly marked and generous, the buffet makes for an easy-to-dine-together meal for difficult groups—but for those not partial to food sitting out all day, there is table service as well.
END_OF_DOCUMENT_TOKEN_TO_BE_REPLACED

I am not creature of habit. But after nearly 5 years working in NYC’s Murray Hill there were two things you could count on:

When I moved to Los Angeles, the crisp onion and smashed lentils of Mujadara exited my life. But two years later, thanks to an invite to try a new vegetarian/vegan friendly menu at Urban Garden, it’s back in my common rotation! But, while UG’s mujadara is decent, what sends me over the edge here the Garlic Sauce!
END_OF_DOCUMENT_TOKEN_TO_BE_REPLACED

I’ve grown weary of falafels. I don’t dislike them, but will restaurants please think of some more original ‘vegetarian options.’ That said, if I am going to eat a falafel, it better be damn good.

Is Spitz’s damn good? Er…  not exactly. But all the junk they pile on top/inside/around the falafel is!
END_OF_DOCUMENT_TOKEN_TO_BE_REPLACED