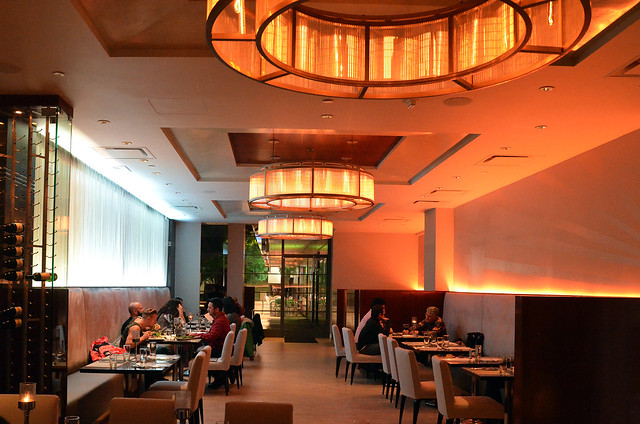 A sputtering fountain in the shadow of the Disney Music Hall marks the entrance to the softly open Au Lac DTLA. Retaining the opulence of the former First & Hope, the modern Art Deco dining room is a refreshing upgrade from the Fountain Valley location. We take our seats in the dinning room as Chef Ito takes the helm of the kitchen. From there he executes a handful of favorites plus a few new tricks. Still in the dawn of the restaurant (official opening on January 1, 2015), Chef Ito’s working menu promises many more new item to come.
END_OF_DOCUMENT_TOKEN_TO_BE_REPLACED

After 8 years in Brooklyn (Bed Stuy! Do or Die!), I kissed my favorite pizza good-bye and flew home to Los Angeles. A few months later I was hired at Slice. I didn’t know much more about pizza then the average NYC foodie. But that’s considerably more than the average LA foodie… and probably how I got the job. This past year I’ve devoured the Los Angeles pizza scene, learning a simple truth: There is awesome pizza in LA!

END_OF_DOCUMENT_TOKEN_TO_BE_REPLACED

I’m not a star chaser. I’m not! Really! But… would I have cared about The Gorbals if not for Top Chef? Er, probably not.

In need for a last minute dinner reservation anywhere downtown, The Gorbals popped up on Open Table so I booked it. Illan Hall wasn’t a favorites on the show, but—much to the chagrin of my school teachers—TV tells me what to do these days.

In the pre-ultrahipsterazation lobby of the Alexandria Hotel an unremarkable door hides The Gorbal’s sparse dining room. Populated with utilitarian wooden furniture and down-lights, it’s a refreshingly quiet space from a winner of a reality television show. Although the unpretentiousness of the space is muddled by the paint-by-numbers predictability of the hostess’ high-waisted jeans and plastic rimmed glasses.

The menu is broken down by animal, with a neat little omnivore section for the likes of me (and you?)! The Pimento Cheese & Corn was sadly out of stock, still we ordered a nice assortment of hits and misses that gave me a clear picture of Chef Illan’s cooking point of view.

Yes, even without the meat.

Our meal kicked off with the Persian cucumbers and clearly not canned Garbanzos Beans tossed with Sesame Oil and Sumac ($8). Wading in a puddle of what I assumed to be watered down sesame oil, the cucumbers were ‘kicked up a notch’ with sumac. Apparently I didn’t know what sumac was before this meal, but I’ll never forget it now! Though the red color implies spiciness, it’s more like a sharp dusting of lemony zest! Fabulous!