Gravity Heights is a strange fellow. Atop the hilly landscape of Sorrento Valley—a wise move to capture the tech workers trapped by the 805’s unholy rush hour traffic—clear glass walls bath the space in light, while maple veneer and sky blue upholstery keep the interior on trend.
END_OF_DOCUMENT_TOKEN_TO_BE_REPLACED 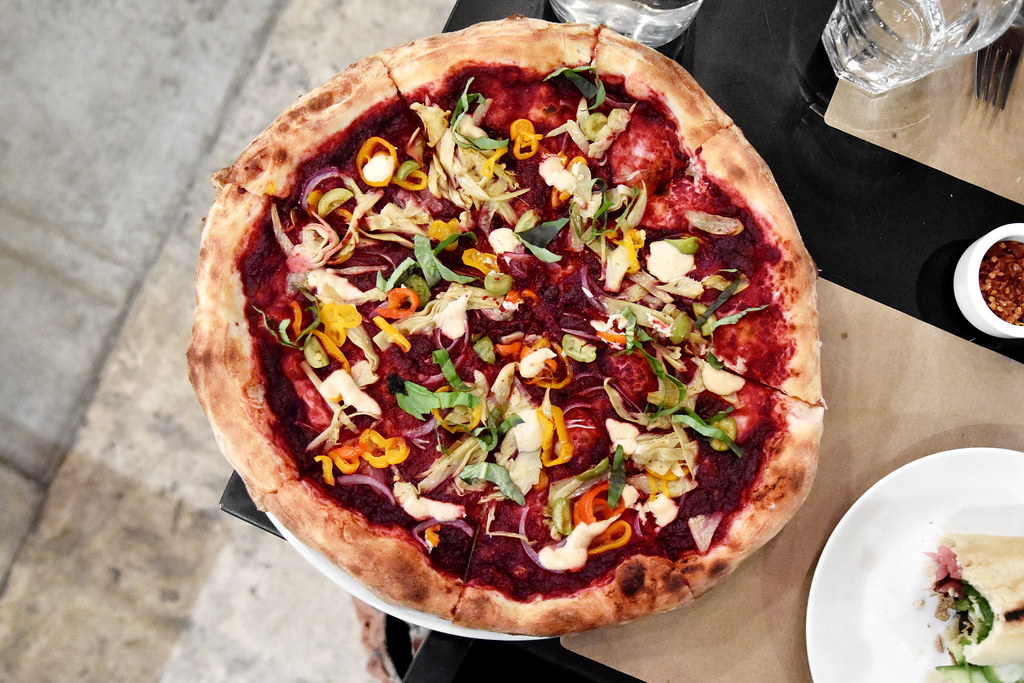 There are two types of people: Those that love a specific style of pizza, and those who love supreme examples of EVERY style of pizza. Tribute Pizza—where pizza topping combinations are inspired by all the American greats—is for people who love them all.

The cavernous hall of the old North Park Post Office seemed an audacious choice for a debut restaurant. But attention to detail and a sweeping love of pizza quickly attracted customers.

On most nights, the restaurant is packed. 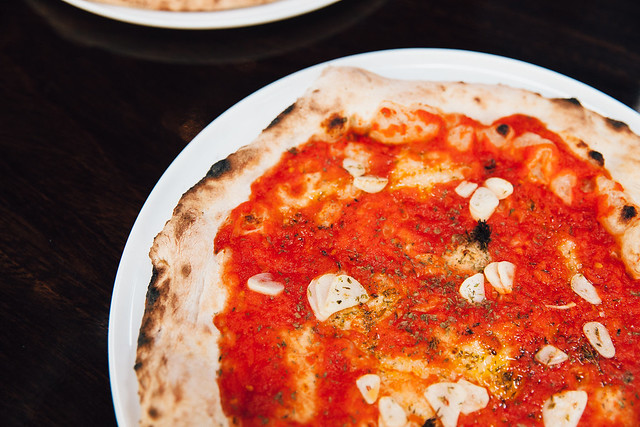 Yeah, that headline didn’t catch my attention either. Another businessman entering the quick service assembly line pizza game is old hat these days. Executive Chef Peppe Miele is another name I glossed over. Then I saw Senior Chef, Mario Vollera, and immediately booked my visit to MidiCi Neapolitan Pizza.
END_OF_DOCUMENT_TOKEN_TO_BE_REPLACED

From the very beginning, the food truck moment has seemed silly to me. Chasing meals-on-wheels which never seem to be anywhere close when you crave them. We mutually burn fuel in a roundabout run that rarely leaves my belly or either of our wallets satisfied. And nothing is as frustrating as trolling through twitter and poorly kept Facebook pages just to find out the truck was on your corner… yesterday. I avoid them all together, except in an exceptional case.

After 8 years in Brooklyn (Bed Stuy! Do or Die!), I kissed my favorite pizza good-bye and flew home to Los Angeles. A few months later I was hired at Slice. I didn’t know much more about pizza then the average NYC foodie. But that’s considerably more than the average LA foodie… and probably how I got the job. This past year I’ve devoured the Los Angeles pizza scene, learning a simple truth: There is awesome pizza in LA!

END_OF_DOCUMENT_TOKEN_TO_BE_REPLACED

UPDATE: There is anchovy in the tomato sauce! What a bummer!

I eat a lot of pizza. So, when the internet gushes praise on a brand new pizza place, how cannot I not chime in? Today, Foursquare and Twitter blew up with love and attention for Milo + Olive’s pizza (most notable by The Unemployed Eater) so I got my butt over there ASAP. Thinking I could successfully avoid the lunch rush, I was still met with a completely packed restaurant. So I placed my to-go order—got an estimated 30 minute wait time—and hopped over to Sonny McLean’s Irish Pub where I nursed a Affligem Abbey Ale in anticipation.

END_OF_DOCUMENT_TOKEN_TO_BE_REPLACED

It’s great to have friend in high places… or hot kitchens! I got an invite to the preview brunch at Santa Monica’s Areal, a breezy white washed patio with a farm to table menu. Through clenched teeth, the kitchen brags that everything is made from scratch and you can taste it in every dish they put out.

END_OF_DOCUMENT_TOKEN_TO_BE_REPLACED

So, what is Brazilian pizza? If Bella Vista Brazilian Pizza is a good representation, then it is a thin crispy crust with delicate, but a piecemeal collection of toppings. Bella Vista is an homage to the Bexiga neighborhood —AKA the “Little Italy” of São Paulo, Brazil— one of the biggest hubs of Italian culture outside of Italy. I invited the Serious Eats LA MeetUp group to this little spot. Though it doesn’t sound like a particularly excellent example of pizza, the abundance positive reviews intrigue.

END_OF_DOCUMENT_TOKEN_TO_BE_REPLACED

If you have ears you’ve probably heard that the New York Times recently called Motorino the BEST PIZZA IN NEW YORK! Is it true? Well, the long answer is: Like yetis, Shangri-La and poo that don’t stink, there is no such thing as the best because blah blah blah… but the short answer is: Yes.

For all the strengths of the pizza, the restaurant has always been a struggle to love. The overexerted waitstaff and pizza-paddle wranglers get pies on the table with impeccable timing, but the wine/water/salad service and general politeness suffer for it.

Upon entering the Grand St location, you bump into the first row of tables. Waitresses frantically wiggle though the isles as clumps of hungry hungry hipsters wearily scan for the elusive host. Since the NYT review, the mass consumable hysteria has spiraled into a full blown melee of middle aged Manhattanites. They suck in our youthful Brooklyn charm while sucking  up all the tables at Motorino. But hey, I was sucked in by the hype too, last year when Grub Street took Mario Batali on an multi-borough new pizzeria tour and he declared Motorion superior to all, I was running after his bandwagon. But back then this was still just a neighborhood joint. With NYT’s declaration, this place now belongs to anyone with a metrocard, cab fair, or driver.