The Alcove is adorable. A brick patio in front of a historical cottage fitted with a counter service café and a throwback cocktail bar… plus a magically available table always awaits you at the end of the winding line of hungry Angelenos. The menu is a rambling list of American and Americanized dishes. Most are decent—some truly suck. Still, if you live in Los Angeles long enough (like 3 months), you will eventually end up at the Alcove Cafe.

If you’re just trolling for the pictures, here’s synopsis: Order fries and onion rings only… possibly a salad. Order one dish per two people.

Let’s start with the worst. DO NOT EVER ORDER THE CHEESE PLATE ($15). It is the most horrendous cheese plate I’ve ever had. I mean, Sage Derby. Seriously?! The mélange of other cheap cheeses and the 1985 tomato rose makes the cheese monster inside of me weep. The herb rolled medallions of goat cheese and thin wedges of brie are passable, but still have an air of supermarket refrigerator case.

The lush Red Velvet Woopie Pie is a gorgeous sugary sandwich with little flavors beyond cream and sweet. It’s great to share with friend who love Red Velvet. But to those people, I ask: What flavor is this support to be?  I’ve read extensively about the history and preparation of Red Velvet, still, I think it tastes the same as white cake. I don’t get it.

My preferred sandwich is the Brie + Apple Panini ($11.95) – it satisfies my need for sweet and cheese. But this is where my major grievance with Alcove became comes into play:  In the one-bite-I’m-so-full-culture of Los Angeles, why are the portions here ginormious?! Brie and apple tastes great for a few bites. Heck, they taste great for ten bites! But after that I feel like I’m eating a bread stuffed with Crisco and the powdery crystals at the bottom of a sour patch kids bag… and there’s still an entire half sandwich left.

The Onions Rings are a meal in and of themselves—though they are more like onion flavored doughnuts then crunchy fried rings. They sort of remind me of Indian vadas! I like vadas!

The massive Taco Salad can feed two starving people. It becomes lukewarm mush halfway through, but you don’t have to worry about that because it’s not on the menu anymore.

The Spinach Salad ($11.95) is a bigger-than-your-head bowl of baby spinach leaves, sliced red delicious apples, avocado, fried goat cheese (which I get in lieu of the applewood smoked bacon), bermuda onion served with balsamic vinaigrette on the side. It tastes exactly like the sum of its parts.

If you still have room, finish you meal with a cocktail at the Big Bar. But you better already know what you want. If you leave the drink up to the bartender you’ll end up with something like this (see pic above). Looks good right? It tastes awful. Why didn’t I return it? ‘Cause I’m a coddling chump… just like you! Seriously why do customer protect the feeling of bartenders and chefs when they ask you if you like ‘such and such’ (then complain about it forever on Yelp or their blogs). I need to turn off my auto-respond of “it’s great!” or “love it!” when they ask. From now on, if I have a problem with something I’m served I’m going to (muster up the strength to) tell them! They may not want to know, but I’d rather offend with my words then with my writing. 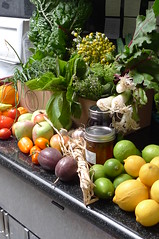