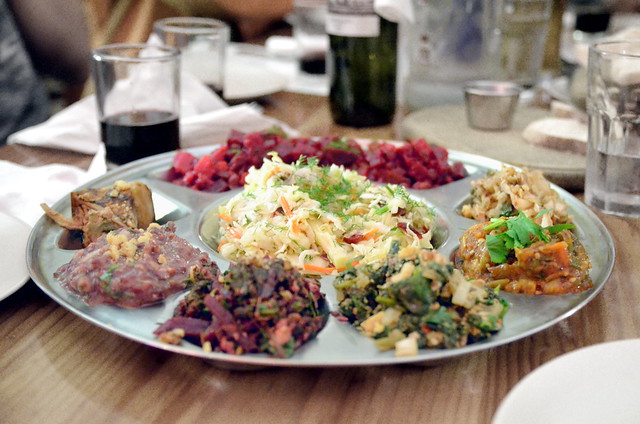 I can’t put me finger on it. Kafe Sobaka Restoran Pomegranate‘s blend of dark Communist humor, Soviet hospitality, Georgian wine, topped with a plentiful selections of vegan options  is so uncommon in the restaurant world. It beckons me with charm and salad, while at the same time flippantly tossing my kudos out the door.

The skill of the kitchen, and diversity of the cuisine, dances around the silver dimples of the Zakuski Sampler Platter. Or as Kafe Sobaka puts it, “For those who left their GPS in the car, allow our wait staff to orient you to the possibilities. ($Anarchist).” Our platter included all the vegan salads—plus a few off-menu items. While some salads—like the Lobio: Pâté style red beans with herbs, walnuts, tomatoes, and onions—were better then others, all were full of sharp, fierce flavors. I’m inclined to call it one of the San Diego’s best vegan dishes. 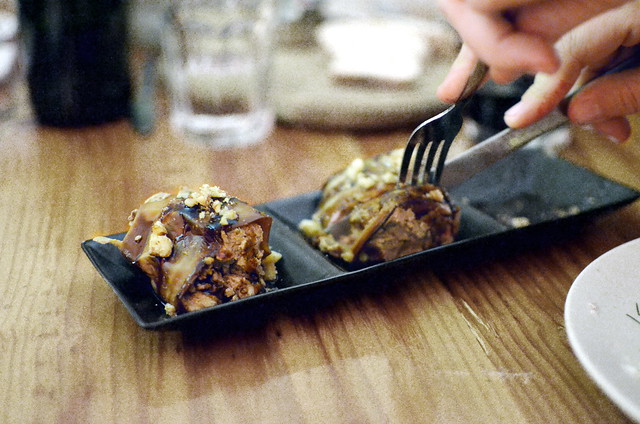 But the star of the platter—and for some crazy reason it’s not on the menu—is the Badridzhani Nigvsit. A thick walnut pate spiked with pungent garlic and cilantro, wrapped in a thin leaf of fried eggplant, and finished off with a tart balsamic reduction. We scraped the bottom of the dish and ordered three more. 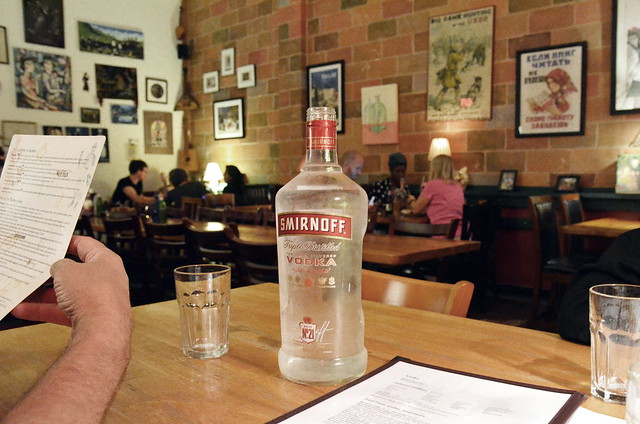 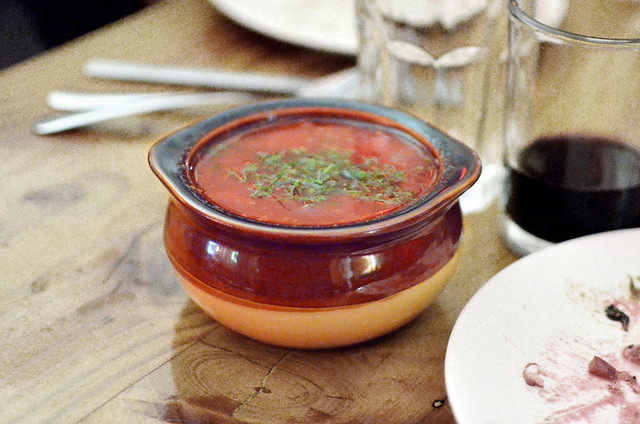 Chilled water comes served in spent vodka bottles and the Borscht ($6.75) is a supple specimen of a pervasive Eastern dish. 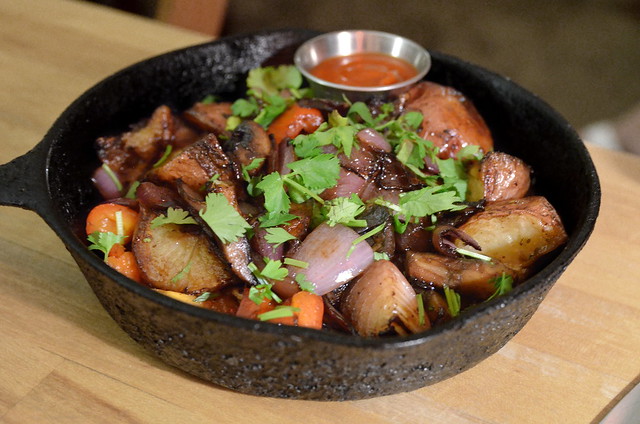 Anther favorite of the table was the Derevenskaya Skovorodka ($10) “Golden fried potatoes, onions, mushrooms, peppers and herbs served in a cast iron skillet. This sets the stage for gulping beer. For this dish I could easily kill my older brother.” An excellent hash, whose surprisingly savory hunks of mushrooms impressed the mushroom hater that is me. The iron comes with a not at all shy hot sauce and a sprinkle of cilantro. We murdered this pan, but not our brothers. 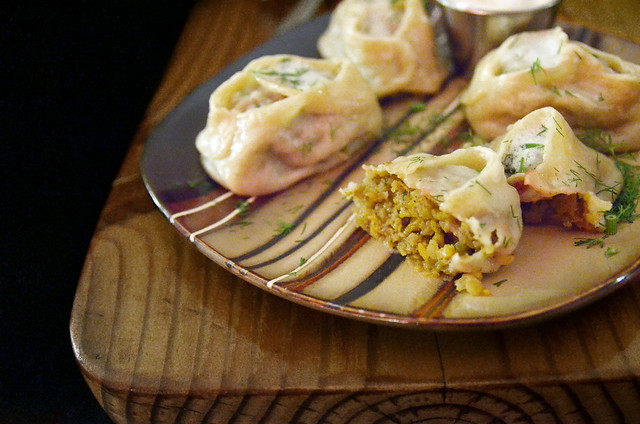 The special of the night brought on these Vegan Pumpkin Dumplings. Tender eastern European skins are filled with coarsely pureed fresh pumpkin and legions of garlic. Topped with a small pat of fresh dill, these are reminiscent of—but not nearly as good as—the pockets I grew so fond of while in traveling Prague. 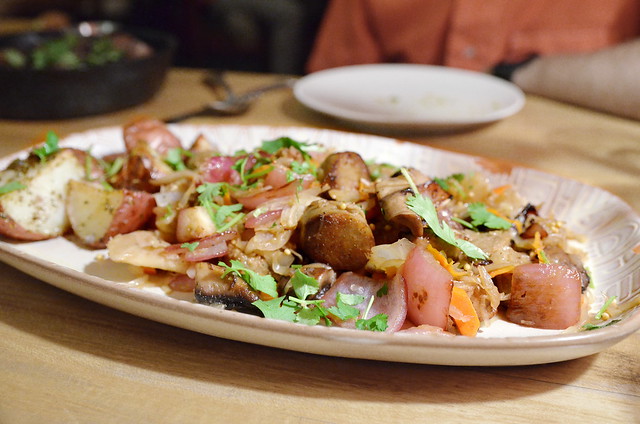 Sometime you can just let the dishes describe themselves. Such is the case with the Welcome to the Gulag: “Times are so tuff here they pile your tray with FAKE meat and cabbage!!!!!” the menu exclaimed. The krouted cabbage laced with popping mustard seeds is sauteed with red onion, carrots and what tastes like Trader Joes brand vegan sausages. Paired with roasted red potatoes and finished with fresh cilantro, this ample dish is a curious ménage of east and west. 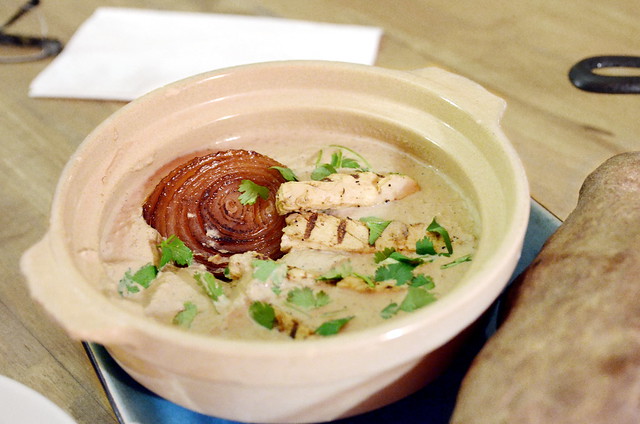 We had no idea what we were getting into with the Satsivi: “Vegetarian chicken (Beyond Meat) with walnut sauce served with shotis puri (Georgian bread). Satsivi is really a party dish par excellence. Can be served cold or hot. GF bread available.” We missed the part about hot or cold and apparently the default temperature is cold. As we poked at the icy gruel, our eyes fell on the mass beside it. “What is this… a potato?” my dad asked. It sure looked like one and it had the heft of a boiled root. Cracking it open, it was indeed bread. We loved it. 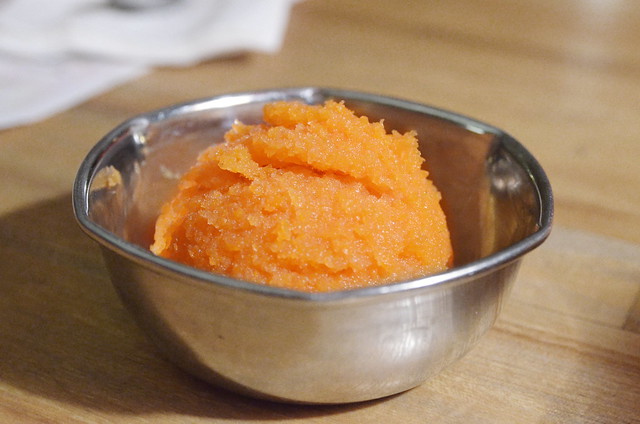 The Carrot Apple “Ice Cream” was an unexpected closer at Kafe Sobaka. Its texture is like a chunky apple sorbet, mixed with a smoothie, with carrot scraps folded in, then all frozen back together again. Neither good nor bad, we ate it (chewed it) in curious silence wishing we had ordered the melon mint sorbet or the poppy seed cake instead.

As we finished this dish, a bald headed gentleman rolled up to the table. “Was the food as terrible as you expected?” We laughed meekly, not sure if this was the owner* or a vagrant.

My dad piped up “This bread is fantastic, I thought it was a potato.” “Ah yes,” he laughed at himself “we make our gluten free bread in house.” A curious kitchen choice as we didn’t request the accommodation—but it was a welcomed modification that made our night.

*Upon Googling I confirmed it was indeed owner Mark Djugashvili 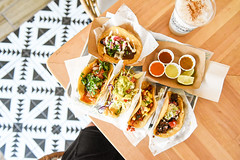