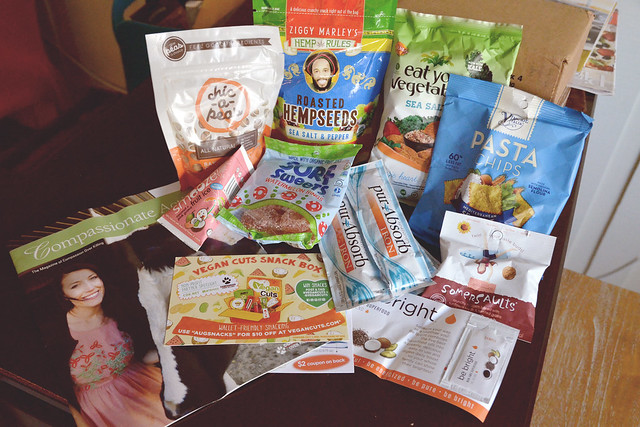 I’ve had the good fortunate of joining a vegan food swap earlier this year; but then the group took a two month hiatus. At that same moment, Vegan Cuts stepped in with this bounty. What arrived was a shockingly tiny box brimming with sample and full sized items… each and everyone new to me.

I had herd about Vegan Cuts previously, but never looked too far into it. I had assumed it was geared toward people in less vegan bountiful parts of the country. Living in Los Angeles I thought I had been exposed to all the best vegan snack items; but this little box put me in my place.

The immediate favorite was the Cinnamon Crunch nuggets by Somersault Snack Co. Crispy bite sized balls of wheat and sunflower seeds from a brand carried at the supermarket 50 feet from my office. I now have a hug bag of these on my desk… and to think, I would have never known about them without Vegan Cuts.

I was so impressed with every item. This box is very much worth the $20.00 price tag; plus it comes with free shipping. Vegan Cuts is a winner!